I recently received the new soft baked bars from Enjoy Life Foods to review. They sent me one box of every flavour, including: cinnamon bun, chocolate sunbutter, cherry cobbler and s'mores.
The first thing I noticed was the great look of the boxes. They are bright and colourful, and would definitely make the product stand out on the shelf. 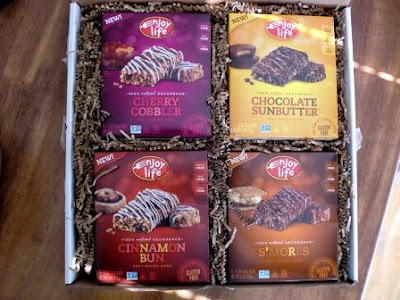 Overall I really enjoyed these bars. They were chewy, moist and flavourful. The price per box on the Enjoy Life Website is $5.29, making them one of their most expensive snack products. I would buy these bars again, but I would probably wait for a sale (they sell them at Superstore) because over a dollar per bar seems a little steep. 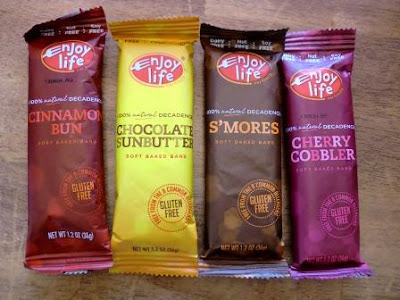 If I had to name this bar I would call it apple cinnamon. This name does not sound as appetising as cinnamon bun, but I think it better describes the flavours. There are chunks of dried apple, cinnamon, and orange peel inside the bar. Even though the product didn't taste the way I had expected, I really enjoyed the flavours and soft chewy texture. My gluten-eating husband commented that these bars don't have that weird grainy/powdery texture that some gluten free foods have. The cinnamon bun was my second favourite out of the 4 flavours I reviewed.
Each bar contains 1 gram of fibre, 11g of sugar and 130 calories. In other words, they make a delicious snack but do not qualify as a health bar.

This flavour was by far my favourite. It tasted so much like an Eatmore chocolate bar. The texture was soft and fudgey with little chocolate chips and chunks of sunflower seeds inside. I think I would actually make a trip to the store to just to buy these.
Each bar contains 140 calories, 1 gram of fibre and 9 grams of sugar.

These bars had a really soft and moist texture. The flavour was quite sour (probably because it contains dried tart cherries). Based on taste alone, I would probably call these bars berry spice or apple berry. The bars contained chunks of dried apples, small pieces of dried tart cherry, cinnamon and cloves. This flavour was alright, but probably my least favourite.
Each bar contains 140 calories, 1 gram of fibre and 12 grams of sugar.

The texture in this bar was a little different than the rest. It was less soft and chewy and more like a dense rice crispie square (not necessarily in a bad way). The bars contain marshmallow, lots of chocolate and even GF graham cookie pieces. I whole-heartedly agree on the naming of this flavour, unlike some of the other ones. It was my third favourite of the 4.
Each bar contains 140 calories, 1 gram of fibre and 10 grams of sugar. 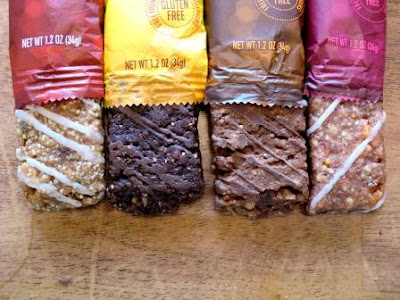 Thanks Enjoy Life Foods for providing these free samples for me to review. All opinions are my own
Posted by Andra Banting at 08:36 1 comment: Links to this post 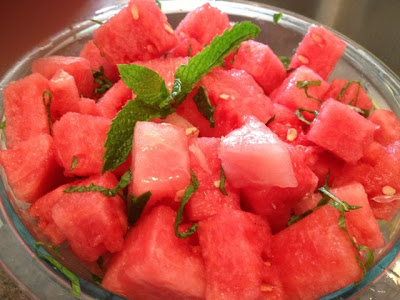 This is my first try writing a blog post from my phone. I didn't even realize it was possible, but what can't smartphones do these days!

It's a simple one. Only 4 ingredients (3 if you make it virgin). Amounts can be adjusted according to your personal preference. I just eye-balled it and tasted as I went, so don't feel like you have to follow the recipe exactly.

In a large bowl, combine watermelon cubes (or get fancy and use a melon baller), lime zest and juice, and rum.
Refrigerate for a few hours, stirring occasionally, or not if you didn't plan ahead.
Lay mint leaves on top of one another and roll tightly. Slice thinly and sprinkle on salad.
Stir again and serve with a few mint leaves as garnish.

Bring this to the next BBQ you get invited to. You might want to make a kid version and an adult version though!

Posted by Andra Banting at 14:11 No comments: Links to this post

Andra Banting
I have Celiac Disease and I love to create tasty and economical gluten free food. I know that many people equate "gluten free" with unpleasant texture, off-putting taste, and poor nutrition, but I hope I can show you the brighter side of gluten free cooking (and eating)!